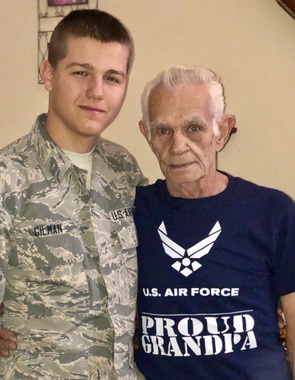 Back to Jerome's story

Jerome A Gilman, age 80, of Apache Junction, AZ passed away peacefully on Thursday, January 16 at the Lund Family Hospice Home in Gilbert, AZ, after losing his battle with cancer.

A celebration of Jerome's life will be held at a later date.

Jerome was born January 12, 1940 in Wisconsin Rapids, WI, the son of Donald and Charlotte(Knuth) Gilman. His family moved to Nekoosa, WI where he attended Alexander High School in Nekoosa. He enlisted in the Navy and served our country for over twenty years, including three tours in Vietnam during the war.

He enjoyed being outdoors in addition to spending time with his children and grandchildren and was always there to lend a hand when someone was in need.

Jerome is survived by his wife, Kerre Gage-Gilman; sons, Douglas and Jerry Gilman Jr, and daughters; Teresa Durazo, Shannon Austin, Jolene Gladden, Lora Hubel. He cherished his 12 grandchildren and 8 great grandchildren. He is further survived by a brother, Roger and a sister, Donna.

He was proceeded in death by his parents, his brother, Richard, his wife of twenty-five years, Kay, and his infant son, Jeremy.

Although his time on earth is finished, the wisdom he shared and love he gave will live on.

The family would like to thank the Lund Family Hospice Home for their kind and compassionate care of Jerome.
Published on January 20, 2020
To plant a tree in memory of Jerome Allan Gilman, please visit Tribute Store.

Plant a tree in memory
of Jerome

A place to share condolences and memories.
The guestbook expires on April 19, 2020.