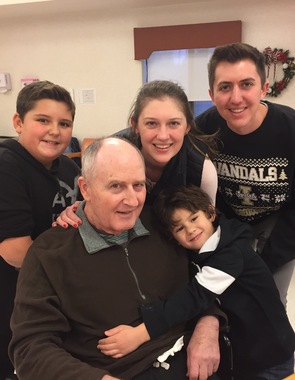 Back to R. David's story

R. David DeBoom was born in Flint, Michigan on April 13, 1942 and passed away on February 4, 2020 in Henderson, Nevada. He earned a bachelor's degree in business administration from Eastern Michigan University. Dave married Cheryl Ann Indorf in 1967 and they lived in Holly, Michigan before moving to Mesa, Arizona in 1980. He served as a foreman for the City of Mesa Parks and Recreation Department for more than 25 years before retiring in 2010. Dave loved fishing and hiking in Mesa's Superstition mountains and his practical jokes and incredible humor will be greatly missed. He is predeceased by his parents Adolph and Sylvia. He is survived by his wife, Cheryl, his two daughters Christina (Darrell) Richards and Caryn (Hector) Villa and four grandchildren: Allison and David Richards and Andrew and Travis Villa, all of Henderson, Nevada. Dave is also survived by his sisters Sandra (Richard) Krasker and Patricia DeBoom (Richard) Rosenthal and brother Robert (Gayle) DeBoom. He served in the U.S. Army during the Vietnam War and earned the rank of Corporal. Dave fought a long battle against Lewy body dementia and Parkinson's Disease, complications due to Agent Orange exposure. The family will hold a celebration of life in the near future-in the meantime, please remember a funny story about our dad and support your favorite veteran's organization in honor of Dave and all members of our armed forces.
Published on February 10, 2020
To send flowers to the family of R. David DeBoom, please visit Tribute Store.

A place to share condolences and memories.
The guestbook expires on May 10, 2020.

Michael Rhodes
Dave and I were good friends in the Holly area in the 70’s. We fished many a pond and stream together in his kayak. He had a great sense of humor and sweet spirit, a beautiful soul remembered and now in heaven!!
View all